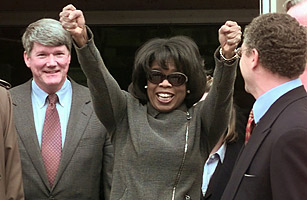 The Gaming Historian is back, by popular demand! Norman agreed to do another episode with us on one condition: that we talk about food. We agreed. (Let’s face it… we’re in no position to be turning down internet celebrities.)

Brandi starts us off with a finger-lickin’-good story about Burger King’s chicken fries campaign. Everyone loved the commercials. They featured an aggressive, masked band called “Coq Roq.” There was just one issue.  Coq Roq bore a striking resemblance to the actual band Slipknot. Slipknot was not amused, and neither were their fans.

Then Norm tells us about his favorite legal battle of all time. It all started when the Kansas City Royals’ terrifying mascot, Sluggerrr, accidentally hit a fan in the eye with a foil-wrapped hot dog. Hold on tight, folks. This one goes all the way to the Missouri Supreme Court.

Kristin wraps things up with a tale about a group of cattlemen who sued Oprah Winfrey. Initially, it looked like Oprah would lose. The trial would take place in the heart of cattle country. And her jury was all-white. All over town, people proudly displayed bumper stickers that read, “The only mad cow in Amarillo is Oprah.” But if there’s one universal truth in this world, it’s that no one and we mean NO ONE is immune to Oprah Winfrey’s charm.

In this episode, Kristin pulled from:
“The time Oprah battled with the Texas beef industry,” The Texas Tribune
“How the west was won over,” Texas Monthly