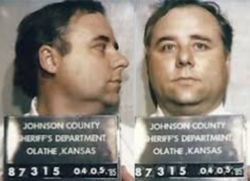 For years, it looked like investigators would never figure out why 23-year-old Cora Okonski disappeared. One spring day, she left home to buy cigarettes from a local convenience store. She was never seen again. Family, friends and police searched for her, but years passed by without a trace of the young mother. In fact, so much time passed that it looked like they’d never figure out what happened to her. Then, 16 years after Cora went missing, police made an arrest.

Then Kristin gives us the heebie jeebies with the tale of John Edward Robinson, often dubbed the internet’s first serial killer. John didn’t start off as a killer. For years, he was just a thieving con man. He was so conniving that at one point, thanks to an enormous ego and a lot of forged letters, he convinced the mayor of Kansas City to give him the “Man of the Year” award. Over time, John evolved from serial fraudster to serial murderer. His killing spree ended when police discovered barrels containing women’s bodies on his property. Warning: This story is as disgusting as it is disturbing.