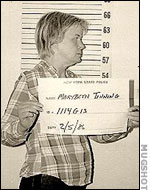 Episode 31: The Many Losses of Marybeth Tinning & the Cannibal Cop Explicit

When Marybeth Tinning’s infant daughter Jennifer died, friends, neighbors and medical personnel felt sorry for the grieving mother. A few weeks later, Marybeth’s young son died, too. People couldn’t believe it. How many losses could one person withstand? Then another child died. And another. And another. In total, nine of Marybeth’s children died over the course of 14 years. In that time, people’s reactions evolved from sympathetic to suspicious.

Then Kristin tells us the story of Gilberto Valle, a.k.a., the cannibal cop. Kathleen Valle knew her marriage wasn’t going great. But when Kathleen figured out exactly what her husband Gilberto was doing online, her blood ran cold. Her NYPD policeman husband had been chatting online about torturing, raping, killing and eating her. But the horror didn’t end there. He talked about carrying out these plans on many women. Authorities took action, but Gilberto’s defense was strong. He hadn’t actually carried out any of these plans. He claimed he was just fantasizing — with no intention of ever harming anyone. This case had people everywhere trying to draw the line between fantasies and criminal intent.