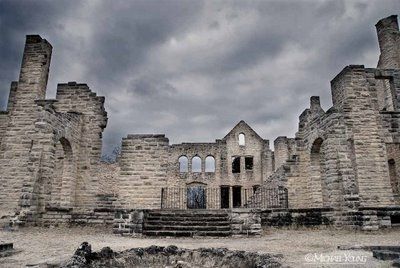 When Kansas City businessman Robert McClure Snyder ordered the construction of Ha Ha Tonka Castle, he thought he was building the ultimate vacation home. In a way, he was. Robert spared no expense for his massive home. Construction began in the early 1900s, and at one time, boasted a construction crew of 200 people. But the Ha Ha Tonka dream home ultimately became a nightmare for the Snyder family.

Then, Kristin horrifies us with the story of Dr. Geza de Kaplany. Geza felt certain that his wife, Hajna Piller, was cheating on him. He didn’t have any evidence, but that didn’t shake his certainty. So what did Geza do? He loaded up a suitcase with a butcher knife, three bottles of acid, and restraints, and waited for his wife to come home.

In this episode, Brandi pulled from:
“James A. Reed: Legendary Lawyer; Marplot in the United States Senate” by J. Michael Cronan
“The tragic story of the mansion and the Snyder family” by Paul Johns, The Christian County Headliner
“MOzarks Moments: The senator, the seamstress, the gangster and Ha Ha Tonka” by Paul Johns, Bolivar Herald-Free Press
“The Lake on Trial” by Michael Gillespie, lakehistory.info