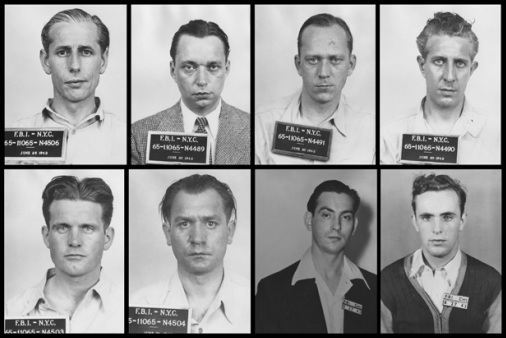 It was early in the morning on March 7, 1986. Joyce Cohen called 911 in a panic. Her husband, Stan, had just been shot. Police rushed to the couple’s lavish mansion in Miami’s exclusive Coconut Grove neighborhood. Joyce told police that she hadn’t witnessed her husband’s murder. She’d been up all night in another room, sorting through clothing for an upcoming charity event. But she had managed to spot a few shadowy figures fleeing her home. Police weren’t sure what to believe, but they had a feeling they weren’t getting the full story.

Then, Kristin tells us about a WWII plot that could have devastated America. In 1941, Adolf Hitler was beyond pissed off. Germany had a bunch of spies working in the United States — but one of them had just revealed themselves as a double agent. As a result, 33 German spies were captured and convicted. Hitler vowed revenge. He started up a new spy ring, dubbed Operation Pastorius. The Nazi government quickly found eight men who’d all spent significant time in America. They trained the men for three weeks, then sent them off in submarines for America. The men were ordered to blow up factories, destroy canal locks, detonate railroad tracks, and ruin New York’s water supply. But someone took the plan off track.

In this episode, Kristin pulled from:
“The Inside Story of How a Nazi Plot to Sabotage the U.S. War Effort Was Foiled,” by David A. Taylor for Smithsonian.com.
“The Nazi Saboteurs Trial,” by Douglas O. Linder for famous-trials.com
“Six Nazi spies were executed in D.C. White supremacists gave them a memorial — on federal land,” by John Woodrow Cox for the Washington Post

In this episode, Brandi pulled from:
“Murder in Miami: Stan and Joyce Cohen” by David Krajicek, The Crime Library
“Revisiting a Case of Murder” by Mike Clary, The Los Angeles Times
“Jail Informant’s Credibility on Trial” by Daniel de Vise, The Miami Herald