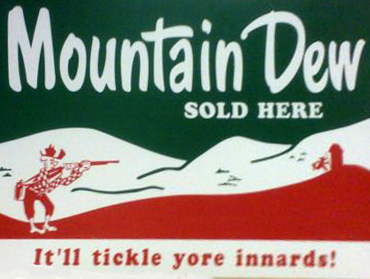 Ronald Ball was thirsty. So he walked over to the vending machine, got himself a Mountain Dew and cracked it open. He took a swig. Right away, he became violently ill. As soon as he recovered, he turned his attention to the Mountain Dew. What the hell was wrong with it? As he poured the rest of the soda into a cup, a dead mouse plopped out. When Ronald Ball threatened Pepsico with a lawsuit, the company relied on a defense that shocked the world… and probably had their PR team looking for new jobs.

Then, Brandi tells us about a string of bank robberies that occurred in the summer of 2012. Over time, law enforcement came to refer to the mysterious bank robber as the “Phony Pony Bandit,” because the robber wore a cheap wig, pulled back in a ponytail. The Phony Pony Bandit went on quite a spree, but it came to an end on September 25, when a sheriff’s deputy caught him in the act.

In this episode, Kristin pulled from:
“Swig of Mountain Dew included dead mouse, suit claims,” by Kelly Holleran for the Madison-St. Clair Record
“A brief history of rodents in soda containers,” by Arielle Duhaime-Ross for The Verge
“Pepsi says Mountain Dew can dissolve mouse carcasses,” by Eric Randall for The Wire.
“Mouse and Mountain Dew Experiment” on YouTube