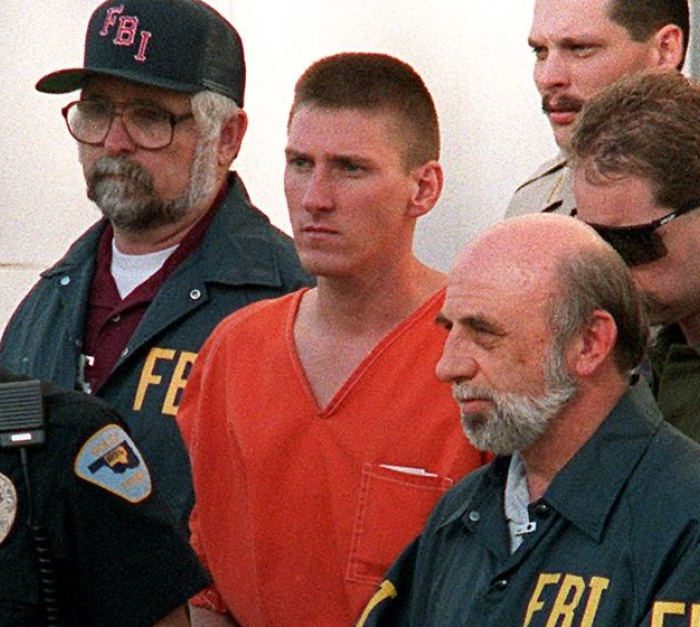 This is our first ever bonus episode! Monthly bonus episodes are available to members of the appellate court ($5) and SUPREME COURT ($7). To listen, join us at: https://www.patreon.com/lgtcpodcast.

Full disclosure: In a move that can only be described as classic Kristin, we got about 15 minutes into this episode before we realized that we weren’t recording anything. Don’t worry, though. We are pros. We stopped, went back to the beginning, and hit that giant red record button. Now the episode is available for all of you beautiful people in the LGTC court system!

This month, Kristin covered the trial of Oklahoma City Bomber Timothy McVeigh. The dude was a total super douche. Timothy McVeigh was a white supremacist who thought the federal government was out to get him. True story: He thought the US Army had implanted a microchip into his butt so that they could keep tabs on him. Stunning that he never had any luck with the ladies. Anyway. After the shootout at Ruby Ridge and the Waco Siege, Timothy decided to fight the federal government. He did so by murdering and injuring hundreds of men, women and children.

Then Brandi tells a story so infuriating, you’ll want to flip over a nearby table. Bonnie Garland was a brilliant student and a gifted singer. In the mid-70’s, she was accepted into Yale University. Initially, she performed well. But then she started dating Richard Herrin. Her grades slipped. At one point, she left Yale to follow Richard to Texas. The two dated for approximately two years, but over time, Bonnie grew restless and Richard became obsessive.

We wrap up this episode with questions from our Supreme Court members.