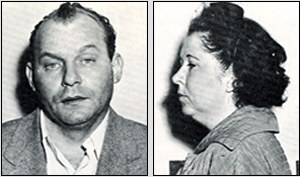 Episode 26: The Big Break & the Kidnapping of Bobby Greenlease Explicit

Eric Abramovitz plays the shit out of the clarinet. He’s amazing. But you know what’s cool about him? He wants to get better. So a few years ago, he applied to the Colburn Conservatory of Music. He set his sights on a huge scholarship and the life-changing chance to study under one of the best clarinet instructors in the world. A few months later, he was rejected. Or was he?

Then Brandi wraps up her kidnapping spree… (hmm. Poor choice of words?) with the kidnapping of Bobby Greenlease. This one started in 1953, when a panicked woman ran into a prestigious Kansas City private school and told one of the nuns that her sister’d had a heart attack. She needed to take her nephew out of school. The nun obliged, but there was just one problem. The whole story was bullshit.

In this episode, Kristin pulled from:
“She faked a rejection from her ex-boyfriend’s dream school,” CNN
“A clarinetist’s girlfriend didn’t want him to leave. So she crushed his dreams,” NY Times
“Abramovitz v. Lee,” CanLII.org