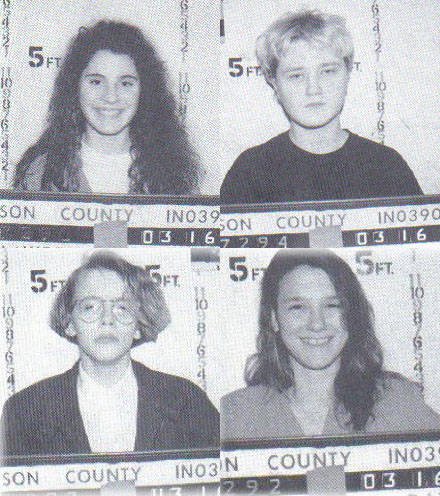 Brandi starts us off with a story so upsetting that she’s put off telling it for weeks. In the winter of 1992, two hunters discovered a body that was so badly abused it initially didn’t look real. The body was charred. It had been beaten and stabbed. Law enforcement officers were stunned. Murders weren’t common in Madison, Indiana, but this one was unspeakably gruesome. Despite the state of the body, it didn’t take long to determine that it belonged to 12-year-old Shanda Sharer. A little while later, investigators rounded up their prime suspects: teenagers Melinda Loveless, Laurie Tackett, Hope Rippey, and Toni Lawrence.

Then Kristin tells us about Jeff and Jody Brooks. In 2014, the couple found a house they thought they’d live in for the next twenty years. The modest ranch in Annapolis, Maryland, had a main floor office for Jody and plenty of room for their children. But the home also had a strange scent. As winter turned to spring, the family discovered snakeskins on the floor. Then, they heard movement coming from inside their walls. What they discovered will give you the heebie jeebies.

In this episode, Brandi pulled from:
“Death of Innocence – The Murder of Young Shanda Sharer” by David Lohr, Crime Library
“Why 12-Year-Old Shanda Sharer Was Tortured And Killed By Four Teenage Girls” by William DeLong
“Woman convicted in 1992 slaying of 12-year-old Shanda Renee Sharer is released from prison” by Justin L. Mack, The Indy Star